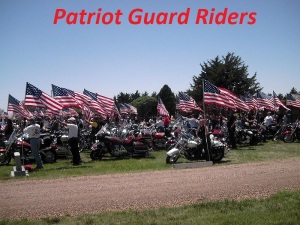 I had an opportunity to have breakfast with my mom at a local McDonald’s restaurant yesterday. It was good to catch up with mom who I hadn’t seen in some time.  We decided to go inside rather than go through the drive-thru and rush through a meal on wheels.

Just outside in the front there were some rather rough-looking characters with beards and straggly gray hair that had on motorcycle jackets that said “Patriot Guard Riders.”  There were nine men and one lone woman.  Some were seated at the plastic table and chairs and some were standing drinking coffee shooting the breeze.  I asked mom what she thought these guys might be doing and she said she believed that they were the motorcycle riders who went around to different funerals for veterans and protected their family from protesters.  After a few minutes they stopped drinking their coffee, bowed their heads for a long prayer, and rode off on their loud thunderous motorcycles in single file.  Mom said she was sure that they were headed to the Fort Gibson National Cemetery which is located only about a mile north of McDonald’s.

Mom and I talked for a few more minutes and then decided to head on back to the house.  As we were driving home, I asked if her if she wanted to go by the cemetery to see if the Patriot Guard Riders were there.  We pulled in the front entrance and I could see they had placed several American flags on poles that were whipping in the wind all around the outdoor funeral ceremony area.  All ten of them were standing in a circle around the funeral area. It looked as if one of the members was praying out loud and all had their heads bowed again.  As we got closer I peered over and noticed that there were only two people attending the funeral under the covered area.  What a wonderful and thoughtful thing for someone to do for those who have served our country.  There are so many who die penniless, homeless, and without a family or friends to attend their funeral.  The “Patriot Guard Riders” are an outstanding group of men and women who give of themselves to honor the military families and those in the military who have served our country.

Today there are more than 220,000 members of the “Patriot Guard Riders” across the United States. The group was formed in 2005 and incorporated in the state of Oklahoma in 2006.  They not only attend and protect at funerals, but they also assist families in financial difficulties with travel, housing arrangements, visit military hospitals, offer encouragement to the wounded in the United States armed forces, do volunteer work at veteran’s organizations, and greet troops returning from overseas at homecoming celebrations.

I suppose my assessment of the characters I saw at McDonald’s was a bit off.  They were not rough characters at all, but some of the kindest people you could ever meet. They are the kind of people in the world today that make a real difference in the lives of others.

By tonyasmithauthor in Blessing, Character, GOD, Heaven, Hope, Inspiration, Life, Time, Trending, Uncategorized on August 11, 2015.
← LORD I Believe In You Write It In The Sand →