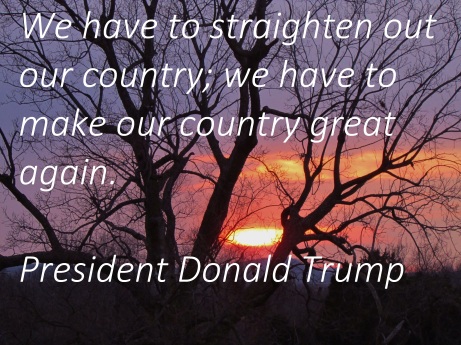 This is just my own personal opinion, but I believe Donald Trump will end up being one of the best presidents we have ever had when everything is said and done at the end of eight years. Yes, I do believe he will be our president for two terms. Donald Trump is not without his faults. Previous leaders had their faults as well. But, I believe there will be a radical change from the way the White House has been run the last eight years.  America will become America again, and GOD will be our foundation of every decision again.  The many prayers for “our country” have been answered.  We now have a man in the White House whose heart beats for America, our people, and all we can become again.

There are many who can’t stand the thought of having Donald Trump as our President for eight years. The inauguration was a breath of beautiful fresh air, and I was glad to see the many prayers for our country and our leaders. It was so cool to see the light rain that started up when President Trump took the podium to speak. Yes, it was a blessing from heaven. GOD was certainly smiling, knowing that America’s leaders were returning and turning to him.  I think we are now destined to return to greatness, and not relegated to second class as some of our previous leaders would position us as a country.  I am elated that President Trump is standing up for Israel.  He is absolutely right in that GOD will go against those who try to harm Israel and protect those who stand up for Israel.  We are now standing up for Israel instead of trying to throw rocks at them like our previous administration did.  It will take some time to unravel the damage inflicted on America by previous administrations but things will change and time will heal, and we will get straightened out.

For those who still refuse to believe that Donald Trump is the new president, I say wake up and get used to greatness!  America will never be the same, and will get even better and better over the next 8 years.